Here is a list of new releases coming out this month so that you can plan ahead.

In Rosewood, Pennsylvania, reporters are lined up outside the historic courthouse, typing furiously at their iPhones with freshly manicured nails. Because the trial of the century is happening right here in Rosewood: the four pretty little liars have been accused of killing Alison DiLaurentis. Only Aria, Spencer, Hanna, and Emily know that they’ve been framed. Ali is still out there, laughing as she watches the girls go down for her murder. But when your nickname includes the word “liar,” no one believes you’re telling the truth. . . .

Aria tries to run away from it all but finds that life on the lam is even harder than life as a liar. Spencer gets in touch with someone who can help her disappear–but when a guy from her past reemerges, Spencer no longer knows what she wants. Hanna decides that she’ll hear wedding bells chime before she serves time. And in the face of prison, Emily does something truly drastic–something that will change her friends’ lives forever.

As the trial goes on and the outcome looks grim, the girls are in their darkest hour yet. But maybe they can finally figure out how to beat Ali at her own game. Because once upon a time, she was just a pretty little liar too.

Click on The Images to Go to Goodreads for More Information 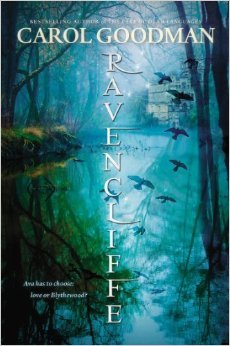 She’s a student at Blythewood Academy, an elite boarding school that trains young women to defend human society from the shadowy forces that live among us.  After the devastating events of her first year at Blythewood, Ava is eager to reunite with her friends—and with Raven, the compelling but elusive winged boy who makes her pulse race. She soon discovers, though, that the sinister Judicus van Drood hasn’t finished wreaking havoc on Blythewood—and wants to use Ava and her classmates to attack a much bigger target.

Ava’s the only one with any hope of stopping van Drood. But to scuttle his plans, she must reveal her deepest secret to everyone at Blythewood. What’s she willing to sacrifice to do what’s right—her school?  Her love?  Or her life?